Most of the time we spend in relationship is during the late-night hours on the crowded streets of Bangkok’s notorious red-light district. The district employs more than 6,000 women a night for prostitution. The streets are filled with loud music coming from busy bars, drunken men stumbling around and street vendors selling food.
One night as we were about to leave for outreach we received a phone call from a friend organization whose ministry in the red-light district focuses on the women in the bars. She told me that a young boy dressed in women’s clothing was dancing in front of one of the bars.

We thought were prepared to see this boy, but no one is ever truly prepared for some of the things we see and experience here. The kids we visit are usually walking up and down the street pulling on men as they walk by, asking for money. We stumbled upon the boy. He was right where our friends had said he would be, only rather than dancing he was just sitting in front of the bar selling jewelry.

A Servant Team member and I stood in front of his table pretending that we were interested in buying something. As we stared at the jewelry, I wanted to start a conversation, so I said, “Thaw-rai?” (How much?) as I pointed at a set of earrings. I looked at him again and saw a child who could not hide the tears trickling down his cheeks, because the streaks were marked in his thick makeup. I asked him why he had been crying, but he just shrugged his shoulders. I asked him where his mother was, and he pointed down the street, saying, “Somewhere down there.”

Later that night, he retrieved a red plastic chair, which became his stage. Slipping on high heels, he fixed his slightly-too-big dress and headband, stood up on the chair and started to dance. It was clear he had done this before, but his awkwardness was obvious and disturbing.

People walked by him laughing, pointing, cheering him on while giving him money, but no one looked at him with shock. Not one person was angry or upset that a young boy was dressed as a girl and being forced to dance. After about 15 minutes he stepped down and sat on the curb next to his chair. He sat there as if invisible. The loud and chaotic street noise continued as he discreetly began to cry.

My Servant Team member asked if she could sit with him, and I said she could. She went over and without saying a word, she became completely broken for this child and began to weep. She put her arms around him and held him tightly. The boy also cried. It seemed as if the boy was experiencing something new a complete stranger cared enough to stop for him and share his tears.

In ministry we are constantly seeing things that shock us, that break us, that leave us with questions that have no answers. We realize that we really do live in a broken world, a world filled with dehumanization, exploitation, injustice, oppression, poverty, broken families and relationships. The list continues on and on.

So why do we in WMF celebrate it? It is because, as believers, we feel that our own brokenness draws us closer to God. I do not have the answers for all the things I see and experience, like when I saw this boy, but I know that there will be justice for him — some day. What I saw that night I will never forget. What I saw was a girl with no answers sit broken with this boy and bridge the language barrier with her weeping. The tears streaming down her face represented hope and confirmation that he is valuable.

We will not always have the answers when we put ourselves in hard situations, but if we can “boast all the more gladly” about our weaknesses and brokenness, so that Christ’s power may rest on us, then at least we are starting at the right place.

Tim Hupe lives in Bangkok, Thailand, with his beautiful wife, Amy, and two amazingly adorable daughters, Elijah and Arielle. He serves as Thailand’s Co-Field Director. You will see him wearing a beanie during Thailand’s cold season, which drops into the 70’s. 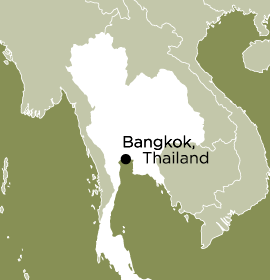