Brazilians are a diverse, energetic people, descended from native Indians, African slaves, European settlers, and immigrants from many other countries. The only Portuguese-speaking country in South America, Brazil is a land alive with natural wonders, from stunning waterfalls and the Amazon rainforest to deserts, mountain jungles, and white-sand beaches. It is the fifth largest country in the world and boasts the ninth richest economy. In spite of the natural resources and wealth of Brazil, the disparity between rich and poor is one of the largest anywhere. The city of Rio de Janeiro has approximately 9 million inhabitants, of which an estimated twenty percent live in relative to extreme poverty, primarily in the favelas (shanty towns) that crawl up the city’s mountainsides.

In 2009, Word Made Flesh Brasil was officially registered with the Brasilian government as Palavra Encarnada. In addition, the first general assembly and board meetings were held.

We are called by God to offer a prophetic witness to the city of Rio de Janeiro, especially to those who struggle with and suffer from drugs, poverty, broken families and violence.

WMF staff and volunteers are in relationship with about 60 children, adolescents and young families who live on or frequent the streets of downtown Rio de Janeiro. Ministry activities include soccer, art and educational activities, Bible teaching, worship and music, meals and prayer. WMF also assists in procuring necessary documents and government identification, as well as negotiating the legal system to assist families with people in jail or whose children have been taken away by social services.  WMF staff periodically make home visits to families who spend time or work on the street in an attempt to encourage and support lives at home.

Projeto Ester (The Esther Project) is a day center that exists to serve women on the streets of Rio, a place where women on the streets can care for themselves and their children.  Our motto is “Christ raising up women, women exalting Christ.” Women come to the center to participate in Bible study, games, art, education and field trips.  In addition, women can receive help with legal and documentation issues.

Projeto Vidinha is a Christian care home for adopted and at-risk children. WMF staff minister at the home as mentors and volunteers. The WMF sponsorship program, initiated in 2006, pairs children from the home with U.S.-based families who provide financial assistance. The children are supplied with basic necessities and educational assistance while opportunities are given for friendships to develop between the supporting families and the children.  In 2010, funding was provided for four children to attend school.  In addition, WMF assisted by providing school books, uniforms and supplies as well as nutritious food for the other twelve children at the home.Timonis is an after-school program located in a favela in the north zone of Rio de Janeiro. Ministering to children from the poorest and most dangerous part of the community, Timonis offers a variety of activities: Bible stories, art, music, recess time, snacks, tutoring, psychological assistance and home visits. WMF staff work in partnership with Timonis as street educators and teachers. 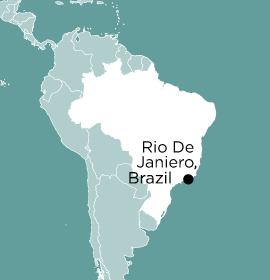