To be a Friend of Peace - Word Made Flesh 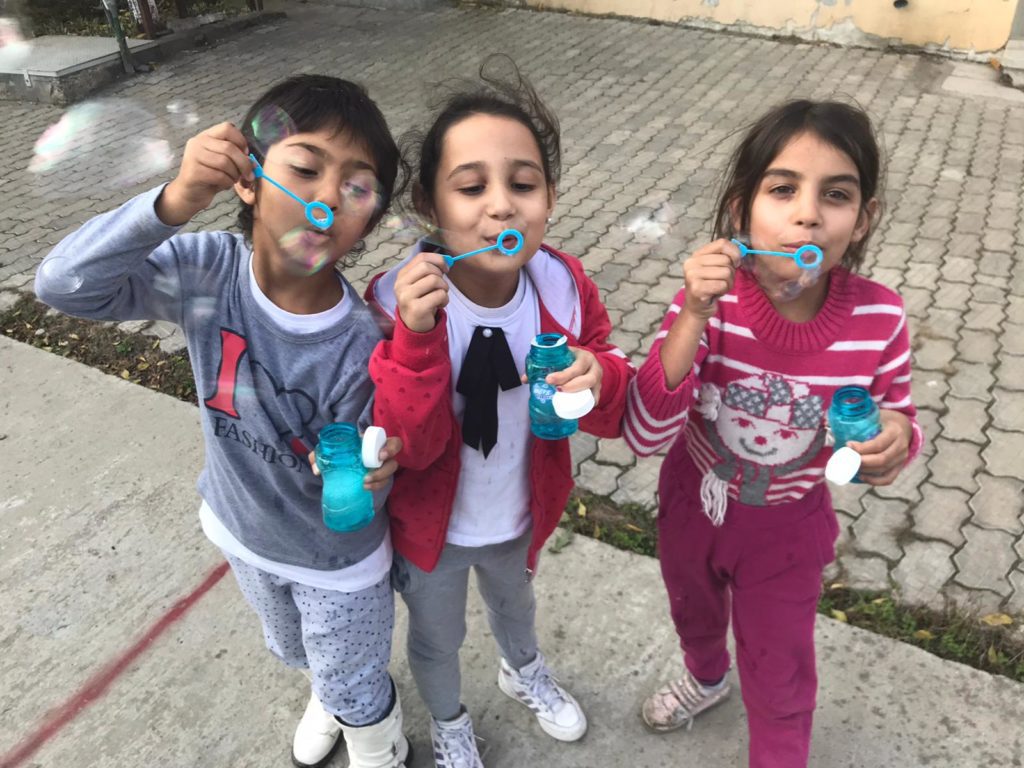 The other day, in our International Office prayer time, we encountered a poignant statement from our reading in Common Prayer: A Liturgy for Ordinary Radicals. The statement echoed lines we earlier read from Psalm 120, “Too long have I had to live among the enemies of peace. I am on the side of peace, but when I speak of it, they are for war.” The statement in our text read, “People who believe in war leave all behind, prepared to die: what price are we prepared to pay to be a people who believe in peace? Those who keep faith to the end will know their weakness the best. God, grant me the courage; help me, that I may plant seeds of peace.”

“Those who keep faith to the end will know their weakness the best.” This is an interesting turn of phrase. So, those who have persevered, those who have been resilient for the long haul, will best know weakness? Initially, this seems odd. One might surmise that those who have been stalwart through it all will best recognize their strength. Yet, with a bit of reflection, I think that we can recognize that wisdom often accompanies longevity and those who have traveled long and far tend to recognize that while we each play a part in continuing our journey, by no means do we have enough control to guarantee our outcome. Those who “keep faith to the end” indeed might recognize their capacity/strength, but they only do so recognizing that any strength that they have been able to utilize is a gift and pales in comparison to their limitations. As with John Bradford or Richard Baxter and thinking of 1 Cor. 15, such persons exclaim, “Except for the grace of God, there go I.”

For such folks “who keep faith to the end,” recognition of weakness often becomes an integral part of the planting of seeds of peace. Recognition that one cannot do it all leans one into further healthy openness to collaboration, camaraderie, compassion, and community.

Being created in a manner that requires relationality and partnering is part of an “Upside-Down Kingdom” perspective. The Lord takes what is too often understood to be weakness and transforms it into blessings. We seek collaboration over competition. We are better together. “Not by might, nor by power, but by my Spirit says the Lord.” We must be “strong and courageous” enough to allow ourselves to honestly recognize our limitations so that the Lord’s Grace and Goodness can better be made manifest through partnership.

“To be a friend of peace” has been on my mind and heart this past week as I have been reflecting on the feast day of St. George (April 23) and his story of defeating the dragon. I have been considering St. George’s life and story alongside also contemplating the story that rose up in my heart of St. Francis and the Wolf at Gubbio.

St. George is most famously pictured as a knight astride a rearing horse driving a lance into a dragon that is on the ground beneath them. Such bravado has not gone unnoticed and St. George has become the patron saint of Crusaders, military outfits, Kingdoms, and etc. However, seeking to utilize a saint for divine sanctioning of human violence is fraught with problems. Rather than sanctioning violent human endeavor, it can be surmised that the story and depictions of St. George and the Dragon are meant to showcase a Christianized allegory of the age old battle between good and evil. George battles a dragon that is poisoning the town’s water system and requiring sacrificial payment of the townspeople’s children in order for it to spare the whole town from immediate harm. The townspeople comply with the dragon’s (evil’s) wishes by choosing to sacrifice others (those who are weak) for self-preservation (for the strong). St George comes along and puts a stop to it. He is willing to sacrifice self (the strong) on behalf of others (the weak). There are many other earlier tales from ancient history that closely parallel this motif. 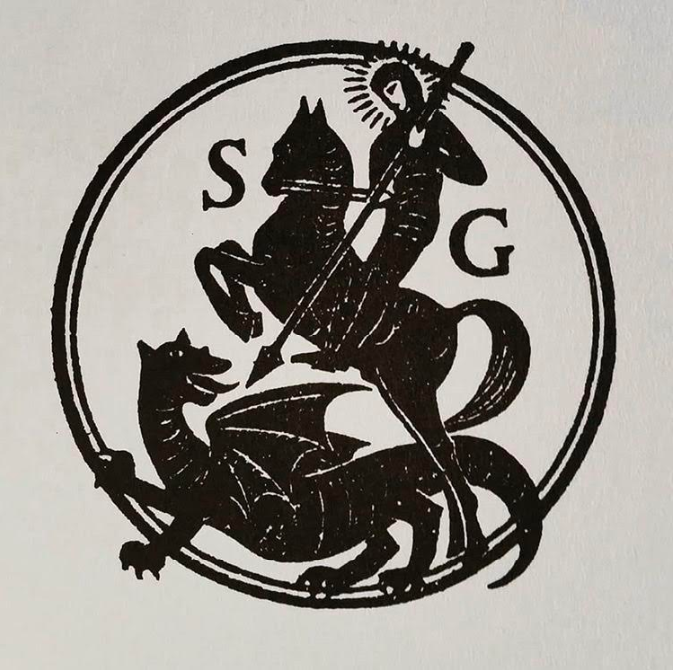 Importantly, before the earliest stories of St. George and the Dragon began to spread (around the 11th century), St. George was being written about in the 4th and 5th centuries. These sources relay that St. George (George of Lydda) is known for having joined the Roman military and served during emperor Diocletian’s reign. George refused to renounce his Christian faith when commanded to do so during the Diocletian Persecution. Because of this, he was dragged throughout the city and then decapitated. Like Christ choosing the way of suffering as a means of redemptive process, St. George becomes an example of choosing to follow the way of Christ’s Peace rather than human violence. The story of St. George and the Dragon becomes a story of choosing good for others even at the point of peril to oneself.

You can read about St. George’s life and about his encounter with the dragon in The Golden Legend (1275) here:

(scroll down to the entry on St. George)

I have loved the story of St. Francis and The Wolf of Gubbio for a long time. I suppose it came to heart and mind as I was thinking of St. George and the Dragon this year because of its similarity of involving a human and a creature involved in mythic engagement.

However, at first glance, the story of Francis and the wolf ends with dramatically different outcome than the story of St. George and the dragon. The wolf lives while the dragon dies. This would seem to lead us to fairly differentiated interpretations. Yet, interpretation finds us on far more common ground than might be expected.

Francis does not agree to the city folk’s request and still chooses to go and encounter the “evil” the townspeople warn him against. Francis meets with the wolf. The wolf initially tries to eat him. Like with Daniel, God’s shuts the wolf’s mouth and Francis and the wolf are able to have a conversation.

Francis finds out that the people have been persecuting the wolf. They throw things at him, hunt him, do not feed him, and commit other similar harmful acts against the wolf. In desperation and anger, seeking to survive, the wolf also perpetuates harm. The story showcases an increasing spiral of violence occurring. Harmful ways have become intractable without a new way forward being offered. As Gandhi has noted, “an eye for an eye makes the whole world go blind.” 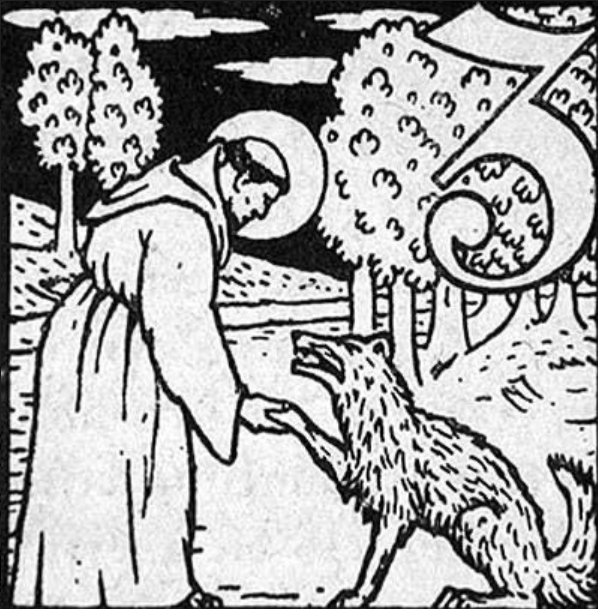 The story ends on a high note with the following passages:

…and the wolf lifting up his paw placed it in the hand of St Francis. Now this event caused great joy in all the people, and a great devotion towards St Francis, both because of the novelty of the miracle, and because of the peace which had been concluded with the wolf; and they lifted up their voices to heaven, praising and blessing God, who had sent them St Francis, through whose merits they had been delivered from such a savage beast. The wolf lived two years at Gubbio; he went familiarly from door to door without harming anyone, and all the people received him courteously, feeding him with great pleasure, and no dog barked at him as he went about. At last, after two years, he died of old age, and the people of Gubbio mourned his loss greatly; for when they saw him going about so gently amongst them all, he reminded them of the virtue and sanctity of St Francis.

You can read the story about Francis and the Wolf of Gubbio, which comes from 14th century text The Little Flowers of St. Francis, here: https://www.ccel.org/ccel/ugolino/flowers.iii.xxi.html

Despite varied appearances (the dragon dying and the wolf living), we find a significant and similar moral emphasized in the hagiographies of both St. George and the Dragon and St. Francis and the Wolf of Gubbio.

The flourishing of a city and its inhabitants is found through eschewing the ways of evil. Goodness thrives through promoting sharing, hospitality, welcome, inclusion, collaboration, compassion, and the like. Evil grows through countenancing exclusion, enmity, violence, greed, fear, favoritism, and the like.

Sisters and brothers, in the midst of hardship and uncertainty, may we be people who plant seeds of peace.

All for the sake of Love, let us not countenance dragons, but let us recognize our complicity in creating angry wolves and accordingly seek to change our ways.

The Peace of Christ be with you.