Kicking Down Doors - Word Made Flesh 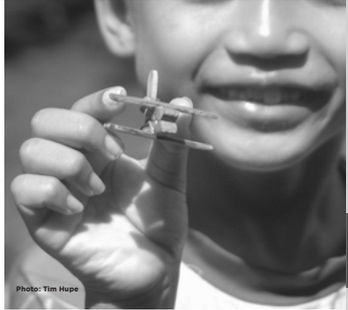 For the last few years we have been visiting children and mothers with babies who beg in Bangkok’s notorious red light districts. During these years we have built relationships with children who have become the financial providers for their family. Mostly this burden has been placed on children as it is hard to say no to a shoeless child who is asking you to buy something. Who can say no to a child who is selling gum on a busy sidewalk in the late hours of the night knowing she should be home sleeping?

During our visits with these kids, we would bring education materials, keeping a folder for each of our students. They would take a break from selling flowers and sit on the side-walk for an hour to work on a math sheet, practice writing the English and Thai alphabets, coloring or just playing games. We taught every child how to write their name. For many of the kids who sat with us, this was their only version of school. The kids ages range between 6 and10, with a few who are as old as 18. Sitting with us on the side walk and taking a break from selling flowers or gum to the many John’s who roam the red light district comes with a price, especially for the younger kids. Often mothers or older siblings would walk over and tell the kids to, “get back to work,” or, “you don’t know anything anyway.” Some would raise a hand meaning, “get back to work or you’ll be hit.”

This was always so infuriating to me. It was very difficult for me to submit to the parent’s requests and tell the kids to go and listen to their mom. I found myself always holding my tongue because I so badly wanted to say, “Why don’t you go to work, it’s your job to provide for these kids! They should be in bed getting a good night sleep for school tomorrow!” I always found a way to hold my tongue because while I knew it would make me feel better to voice this frustration, the child would pay the price for my outburst. After the investment of time and relationship, the parents began to allow their children to sit with us. We could not rush this process. In the end we worked out an agreement that we would only come to the street on the slow nights. It is hard to submit to an act of exploitation or the idea that we need to negotiate something as important as education or child safety. Still, we have known from the day we arrived in Bangkok that change doesn’t happen overnight.

Last March we rented a house that now serves as our foundation’s office and community center. All of our small projects run out of this center. It is located in the heart of the city, only a 3 minute commute by bike to the red light district. We are also located near a lower income neighborhood where some of the children that we know live. Instead of going to the street to tutor children we began teaching them at the center during the day. We began at 3:00 in the afternoon because our students still need to work at night and the afternoon start time allows them to sleep in the morning. We also escort the children to the center.

One afternoon I was picking up a few of the children with my youngest daughter Arielle. I will never forget this day and Ari probably won’t either. The kids we were picking up lived in a small room that was situated in an old apartment building. The small 2-story building looks more like an old house that was turned into many one-room apartments. This is common in Bangkok. On the first floor is a narrow hallway which leads to the tenants shared shower room. The hallway isn’t long but it consists of about 14 rooms all smaller than the average guest bedroom or even some bathrooms. Families, some made up of 6 people, squeeze into these living spaces. The walls are made of thin plywood so everyone’s business is public.

I was standing in that narrow hallway with Arielle waiting for kids, when we heard a small boy screaming along with very loud thumps. For one whole minute, 60 long seconds, we stood in the hallway listening to a three year old boy being beaten. My experience on the street was that the child pays the ultimate price if I decided to interfere. But how could I not do something? How could I just stand there as Arielle held my hand tightly in fear? The parents of the kids we were picking up stood there too, shaking their heads telling me that this kind of beating happened all the time. And something in me lost it. In this moment I could no longer submit to culture. I walked to the door, raised my foot, and kicked down the door. My eyes locked with the mom’s as I approached her and simply said, “That’s enough”.

Times exist when we must submit to culture and the things we do not fully understand. But there are also moments when the door of injustice submits to a righteous kick and the hinges of violence and exploitation swing open to a moment of freedom. I’ve had moments when I wonder how I could have handled this situation differently. Still, slowly and surely, freedom is coming. These same children who we used to tutor for a few hours on the street are now enrolled as full time students in a small pilot home school that I am co- running and which our two daughters also attend. We are celebrating one year in which four children have not worked a single night on the street in the red light district of Bangkok.

Tim Hupe has been on staff with WMF since 2008. He is WMF Thailand’s co-director and co-founder ofthe Creative Life Foundation, a local Thai foundation established in 2013. Tim is currently home schooling his 2 daughters along with 4 other children who were previously selling flowers in Bangkok’s red light districts.