To Dream - Word Made Flesh

Doina* was one of the first children we met when we began partnering with a state-run boarding school for vulnerable children in Moldova in 2010. She immediately stood out to us as a bright, spunky child who was full of energy and ready to learn. As we got to know Doina through our after-school program, we learned that her family situation was deeply challenging. Her mother had been left alone to raise Doina and her eight siblings, but because of other complications, Doina, the youngest of the nine, and the others were actually raised by their older brother. All things considered, one would have expected that Doina would be a child who struggles in school, whose behavior was not up to par and who had little hope for the future. We did meet some children at the boarding school who were like that, but Doina was different. Although she did struggle with the thought of being stuck where she was, was tired of being under her brother’s thumb and due to her high energy had a difficult relationship with her teachers, Doina’s optimism won out.

In 2012, my wife Rachel initiated a sewing program for the teenagers who came to our after-school program. Not only did this program serve as vocational orientation and earn the kids a little money, it was also a program that practically showed them their worth. They were able to create things that were beautiful. These children who had been told over and over that they would amount to nothing were creating bags, make-up pouches, bookmarks and cell phone cases with their own hands. Doina was a part of this program which allowed her to focus her energy creatively. She even went above and beyond Rachel’s guidelines by decorating her own clothes with colorful details and designs.

About a year after we returned to the US, Rachel & I heard that Doina had a dream. She wanted to go to trade school to become a fashion designer. When her sister in Ireland heard this, she sent Doina a sewing machine so that she would have the tools needed in order to freely pursue her dream. She is currently studying at this school and is doing very well.

I like Doina’s story because it is so practical. Her participation in Word Made Flesh’s program affirmed her dignity and helped her to channel her energy into something that she loved and that she would be able to use in the future. Although she was a child from whom many cast their eyes, she took hold of her dream and is seeing it come to fruition.

May each of you, like Doina, find hope in the knowledge of your own dignity and in your ability to create beautiful things. Whatever your vocation, may you find value in your work and may you find the presence of the divine with you in each moment, whether you are in a state-run boarding school in Moldova or in a corporate office in a US city.

*Doina’s name has been changed. 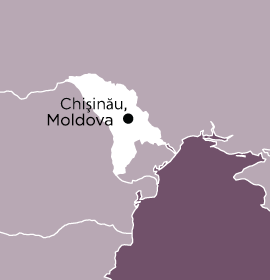