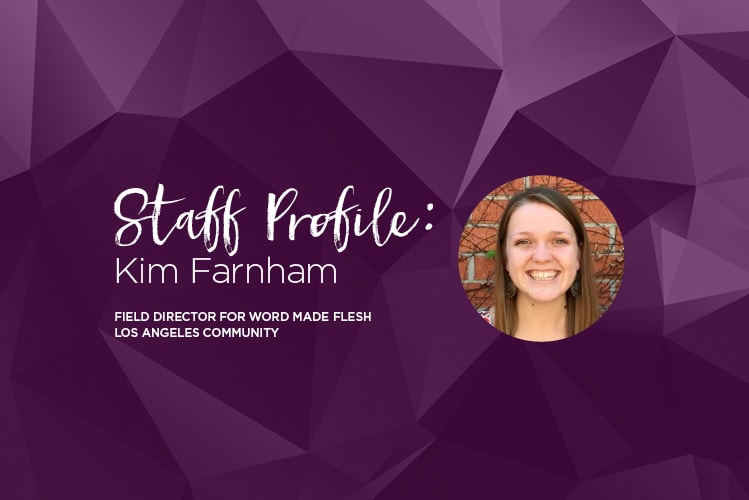 1. What made you want to work in Los Angeles?
I spent a year and a half in Rio de Janeiro, Brazil studying transformational urban leadership. After earning my master’s degree, I felt a strong call to go back to Los Angeles, where I had lived as an undergraduate at Azusa Pacific University. I had the beginning of many roots there and felt like God was calling me back to them.

2. What does the ministry look like right now?
Because we are so new to the city, our primary goal is being good learners. We want to absorb everything we can about this city and the people here before we jump into ministry. We are doing some asset mapping, researching the history, and discovering the many different groups of people who call Long Beach their home. Once we understand the city more, we will know the specific ways God is calling us to be a part of His Kingdom here. If we tried to jump into ministry right away, we would be doing it from our own strength and vision.

3. What successes, big or small, have become the most memorable for you?
Some of my favorite moments have been getting to know our neighbors. When we first moved in, we baked so many cookies and went door to door handing them out. People were pretty confused, as knocking on strangers’ doors is not really something you do in Los Angeles unless you are selling something. Once they realized we were just trying to be friendly, they were really warm and inviting. This was six months ago, and people still refer to us as the cookie girls.

4. What has made the biggest impact in your life while being in Los Angeles?
One of the most interesting parts of our experience so far has been recognizing how intentional God was by placing us in the specific community we are a part of. Without knowing it, we moved into the community with the most active neighborhood association in the city. There are also many other non-profits here, including the United Cambodian Community. The neighborhood is full of people who want to see our community be the best it can be. It is incredibly encouraging to go to a place where people who are already working toward a common goal welcome you into the neighborhood. God is doing something great in this community, and we are excited to see how we can be a part of it!

5. What do you look forward to in the next few years?
We are still unsure of what our niche in the community will be. In addition to asset mapping and research, we are spending lots of time in prayer as we discern our role in bringing God’s shalom to this city. Because there are already so many nonprofits and organizations working for the good of the city, we anticipate being more of a missional community, as opposed to program-oriented. But we are open to whatever the Lord would have us do here.

6. How has God been working in the Los Angeles community?
It is a season of sowing, so the fruit is not really visible yet, but we have seen hints of some beautiful connections among our neighbors. We have also been learning a lot about stability. We see stability as something the Lord is calling us into, not only as a method for sustainability in ministry but also as a marker of a different kind of community.

7. How do you want others to view the Los Angeles community?
We are definitely more of a missional community than anything else, which makes describing what we do difficult at times. People often measure a successful NGO in ways that do not apply to us. For example, relationships are so vital to who we are and you cannot measure those by numbers. Similarly, we not only want to be seen as an organization of service and empowerment, but also as a community of mutuality where our presence and actions are as much, if not more, about the people who have been here for years and years than they are about us.

Kim grew up on Maui in Hawaii , and has been the field director for the WMF Los Angeles community since September 2015. Ethnic food, traveling, and singing are just some of her many loves. She is also currently taking piano lessons.
kim.farnham@wordmadeflesh.com